The Chinese Ding Bowl: Could It Happen To You? 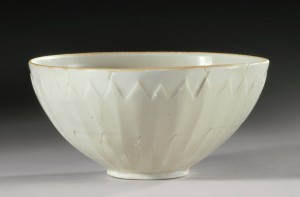 Three years ago in March, the world was fascinated to learn that an incredibly rare Chinese Ding bowl sold at auction for $2.2 million after being discovered at a local yard sale for $3. The now famous Chinese bowl was crafted 1,000 years ago during the Northern Song dynasty. “Ding” wares are celebrated among collectors for their delicately thin carved walls, feather light weight, and fluid naturalistic designs. Only one other bowl of this age, size, and style is known to exist and is housed at the British Museum. Sold for only $3 at a yard sale somewhere in upstate New York (our own backyard!), the bowl sat on a mantle for years until the lucky owners got curious about their garage sale find and started digging around. A quick trip to an appraiser led to the bowl’s record-breaking sale at Sotheby’s in March 2013.

The odds seem incredibly small, don’t they? It’s hard to believe, but this kind of thing really happens and it happens quite often! Rare and valuable finds can and do turn up in the most unlikely of places. A £53.1 million Chinese vase sat unnoticed in a modest London home for years until it was discovered in 2010. An art collection worth $30 million was found in a Long Island garage in 2013. More recently, an extraordinarily rare Ty Cobb baseball card (part of a group known as The Lucky Seven valued in the seven figures) was found in a brown paper bag and nearly thrown in the trash

Everyone hopes that they could be the next lucky person to stumble across a valuable piece of Chinese porcelain, a lost Old Master painting, a one-of-a-kind baseball card, or a rare coin. The easiest way to be that lucky person? Don’t have a garage sale or yard sale without having your stuff checked out first!

For example, in 2009 a woman bought a very small unsigned oil painting for $1-2 at a yard sale in the Saratoga Springs / Albany region. She had a feeling the painting might be worth more and brought it to Mark Lawson Antiques for us to take a closer look. The unassuming painting was by the famed local folk artist Grandma Moses and brought the observant woman $7,500 at auction.

Or, in 2006, an elderly woman in the Adirondacks uncovered an interesting painting in the family storage unit. The painting was so vibrant it looked as though it had been painted yesterday. She brought the painting to Mark Lawson Antiques and discovered the painting was the work of the Renaissance artist Giulio Clovio. The discovery of a previously unknown Old Master painting drew the interest of collectors worldwide; the painting was purchased by the Croatian Ministry of Culture for $84,155 and returned to the country of Clovio’s birth.

Are you thinking of having a garage sale or yard sale? Your storage unit, attic, garage, or basement might have an amazing find just waiting to be discovered. Email us at marklawsonantiques@gmail.com or call us at (518) 587-8787 and we’ll help make sure you don’t miss out!