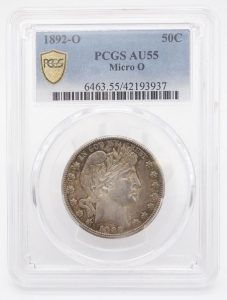 Artist and Numismatist Augustus Heaton published his “Treatise on the Coinage of the United States Branch Mints” in 1893. This was the landmark book that inspired collectors to consider mint marks as varieties worth collecting. Nineteenth century numismatists had previously paid little attention to mint marks. In his book, Heaton states (concerning the 1892 New Orleans Mint half dollar), “There is one variety of this piece with an exceedingly small O…”

A 2003 population study published by the Barber Coin Collectors Society confirmed just over fifty known examples. A handful of examples have come to light since, most well-worn coins that don’t hold a candle to the present example.

It’s believed that the mintmark punch used for this variety was actually a punch intended for use on Barber Quarter dies. Additionally, this example displays a mintmark distinctively different from the mintmark described in all the numismatic reference works we’ve consulted.

The left wall of the “O” appears to be thicker than the right wall, just the opposite of what’s seen on all published examples in which the left wall of the “O” is very thin, and the right wall thick. The interior of the mint mark appears to be shaped like an upright football, as is the case with other known micro-O coins. Is it possible that the same quarter mint mark punch was applied to another die, but rotated 180 degrees? The owner of the PCGS all-time #3 Barber Half Dollar registry set (the Shireman collection), writes in his registry comments, “An important numismatist shared with me that there may actually be two different types of small mint marks, but this needs to be verified.”

Here is that verification.

This example it will be offered in the upcoming auction Property from the Estate of Mrs. Charles R. Wood

You can view on either auction platform:  Invaluable.com HERE or  LiveAuctioneers.com HERE