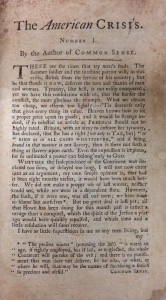 Have you ever dreamed about finding a piece of history? This 238 year old history-making pamphlet was saved from the trash by one very lucky Albany family; this rare copy of Thomas Paine’s iconic Revolutionary War pamphlet “The American Crisis” sold at auction for $100,000 on November 25th.

This important document was the headlining lot at Swann Galleries Printed and Manuscript Americana sale. Thomas Paine wrote “The American Crisis” in 1776, calling for the overthrow of the British government and urging the creation of an independent nation. The pamphlet’s stirring lines,

“These are the times which try men’s souls: The summer soldier and the sunshine patriot will, in this crisis, shrink from the service of his country; but he that stands it NOW, deserves the love and thanks of man and woman. Tyranny, like hell, is not easily conquered, yet we have this consolation with us, that the harder the conflict, the more glorious the triumph. What we obtain too cheap, we esteem too lightly.”

are among those that were read to the Continental Army before the battle of Trenton in 1776, bolstering the flagging spirits and confidence of the exhausted soldiers, spurring them on to victory.

Thomas Paine later issued additional numbers of The American Crisis. The eloquence and stirring rhetoric of his words in this extremely important document played a large role in turning the tide of the American Revolutionary War.

The pamphlet was rescued from destruction by an Albany family and brought to Mark Lawson Antiques for appraisal.