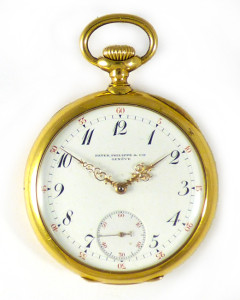 A client brought us this beautiful Patek Philippe pocket watch in 2014, just in time to coincide with the renowned company’s 175th Anniversary. Patek Philippe is considered among the most prestigious of luxury Swiss brands and is respected for creating some of the most complicated mechanical watches ever made.

The company’s origins lie in Geneva, Switzerland. Antoni Patek began making pocket watches in 1839 with a fellow Polish watchmaker Franciszek Czapek. The duo employed a small team of workers and created a limited number of fine quality pocket watches by individual order, usually reflecting themes from Polish history and culture. Only a few of these watches survive, but they are notable for their technical skill and degree of artistry. Patek earned a reputation for emphasizing the artistic quality of his pocket watch cases. Increasing tensions between Patek and Czapek led to the end of the partnership in 1844.

In 1851, Antoni Patek joined forces with French watchmaker Adrien Philippe, the inventor of the keyless winding mechanism. The mechanism was an impressive development in watchmaking technology; no longer were keys required to wind the watch. Watches could now be wound and set using the crown. Philippe earned the Gold Medal at the French Industrial Exposition (aka World’s Fair) of 1844. The partnership of Patek Philippe led to new innovations in technology while simultaneously emphasizing design. The company pioneered the perpetual calendar, split-seconds hand, chronograph, and minute repeater in watches. Their timepieces found a receptive audience among the wealthy and elite families of Europe, even supplying watches to Queen Victorian and Prince Albert of England.

This particular watch from our client dates to around the turn of the century and features a solid 18k gold case set with rose cut diamonds. The watch found a new home with an appreciative collector for an exciting price that our client was quite pleased to see! Other examples of fine antique and vintage watches we have assisted our clients with can be found on our Watches page. Or, take a peek into the heart of the watch collector over on the blog.