From the Archives: A 19th Century Henry Capt Carriage Clock 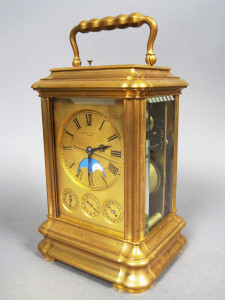 Today we’re taking a look back at one of our auction highlights from 2010: a late 19th century bronze doré carriage clock.

The first carriage clock was invented by Abraham-Louis Breguet, the leading watchmaker of his day. Breguet (1747-1823) was born in Neuchâtel, Switzerland. His step-father came from a family of watchmakers, and while Abraham-Louis resisted joining the trade as a youth, he eventually developed a keen interest in horological pursuits. He began his career as an apprentice to a master watchmaker in Versailles and soon astonished his mentor with his aptitude and intelligence.

Throughout the course of his career, Breguet took his place as one a notable horological innovator, inventing a self-winding watch known as the “perpetuelle”, developing multiple advances in accuracy and function, and creating the world’s first wristwatch, in addition to the carriage clock. Breguet made his first carriage clock, or ‘pendule de voyage’, in 1810. The carriage clock fulfilled the need for a smaller, more portable clock that could accompany travelers on their journeys. The carriage clock was designed to be robust enough to deal with the jostling and bumping of riding in a carriage, while maintaining an elegance of design crucial to the aesthetic requirements of the upper classes.

Our client’s carriage clock is a beautiful example of the style. The bronze dore case is designed in the Classical style with a tall, columnar form. The carrying handle allowed the owner to easily carry the clock from room to room. The carriage clock is accompanied by its original carrying case, a sturdy leather jacket with an open panel that allowed the clock face to be seen even during travel. The clock is signed “Henry Capt, Geneva” for Captain Henry Daniel, a retailer of fine clocks and watches in Geneva who also had branches in London and New York.

Clocks from this time period were quite sophisticated (thanks in large part to innovators like Abraham-Louis Breguet) and included such features as a dial depicting the days of the week, day of the week, phases of the moon (important information for the days before streetlights, when nighttime travel depended on moonlight), perpetual calendars, thermometers, and alarms. It’s quite extraordinary to realize the ingenuity and technical mastery of watchmakers like Breguet who was an innovator ahead of his time. Fine quality antique clocks and watches can be an amazing accomplishment of engineering and design. Our client’s carriage clock was a handsome example of late 19th century craftsmanship and design, and sold at auction for $7,500.