Today’s spotlight is on an early twentieth century piece of  Western American History. Recently we took a look at the authentic Native American jacket we found at the Malden Bridge Community Center Appraisal Day event. The jacket is characterized by intricate beading and design. 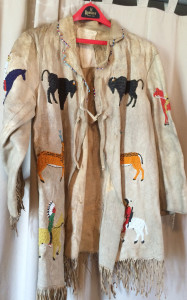 Though the history of this garment is still speculative, the original owners believe that it was crafted by Plains Indians primarily as a costume in the Buffalo Bill Wild West Shows. Shows like Buffalo Bill’s and others characterized late nineteenth and early twentieth century entertainment in the central and eastern United States.

The Buffalo Bill Wild West Show started in 1883 under the leadership of William Fredrick “Buffalo Bill” Cody. Cody employed a cast of over one hundred Native Americans, and sharpshooters like Annie Oakley to portray a theatrical and abbreviated history of the “conquering” of the western frontier to an audience that knew little of the American Indian wars of the 18th and 19th century.

The Wild West Shows were created to romanticize pre-war Native American civilization. The shows featured live “buffalo hunts” and even reenactments of the Battle of Little Big Horn. Some of the cast in the Wild West Shows  had even been present for the battle, and -for the most part- willingly participated in the battle’s caricature. Though the Wild West performances originated  in Nebraska, they became so popular in the late 1800s that the cast went on tour to New York and Europe, accumulating a large fan base that included Queen Victoria. 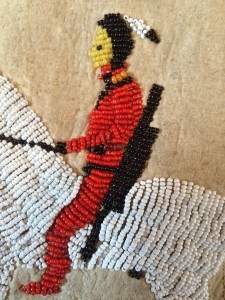 The beaded jacket here was not created for traditional use in everyday Native American life. It was created as an eye-catching garment to be worn by performers in the Wild West Shows. The details are more intricate and the colors are brighter than one would normally see on a traditional Native American item. This particular jacket is a costume that was worn by a Wild West Performer during the early 1900s, and it is estimated to be work between $3,000 and $5,000.