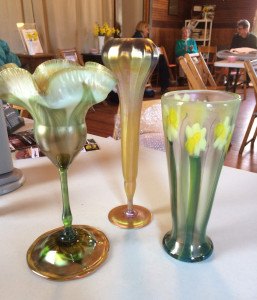 On Saturday, April 25th, we were at the Malden Bridge Community Center for an Appraisal Day event. The event is similar to the Antiques Roadshow: individuals bring in their family treasures for appraisers to evaluate, looking for information and hoping for a pleasant surprise. We had a great time at the event, meeting lots of people and seeing some really interesting things. This week we’ll be taking a closer look at some of the highlights from the day.

One attendee at the Appraisal Day at the Malden Bridge Community Center brought in these three beautiful Louis Comfort Tiffany vases. The vases are a very nice example of Tiffany’s innovative favrile glass technique. Favrile glass was a unique development in the late 19th century; unlike many other types of period iridescent glass, the luminous hues of Favrile glass were created by embedding the colors in the molten glass rather than applying them later to the item’s surface.

Louis Comfort Tiffany was inspired by the rich, shimmering colors of ancient Roman glass, and discovered that he could achieve a similar effect by adding chemical impurities to molten glass. While his contemporaries focused on “pure” glass, Tiffany’s deliberately “impure” glass achieved an unmatched iridescence and vibrancy. The two vases at the left and center in the image are beautiful examples of classic Tiffany favrile glass. The vases are also a striking example of how Tiffany brought fanciful natural forms into his art glass creations. The vases have graceful, elongated forms that echo the shape of a blooming long-stemmed flower. The far left type of Tiffany vase shape is usually called “floraform” and is characterized by a ruffled rim and (often) a figural plant-like stem.

The vase on the far right of the photo is a rather more unusual piece of Tiffany glass. Unlike the favrile glass vases which are iridescent and opaque, this daffodil-decorated vase has more of an overall translucence. This type of Tiffany vase is known as a paperweight vase and was made using techniques typically applied to art glass paperweights. The effect is quite lovely: a row of brightly colored daffodils appear to be suspended within the surface of the vase. The vase has an overall iridescent effect with a transparent background.

We never tire of seeing Louis Comfort Tiffany vases, lamps, dishes, or any of the spectacular pieces that came from the Tiffany Studios. Tiffany was a remarkable artist and innovator. If you’re interested in learning more, we wrote about a few very interesting pieces of historical memorabilia from the Tiffany Studios from a 2013 appraisal event and celebrated the anniversary of Louis Comfort Tiffany’s birth in February.