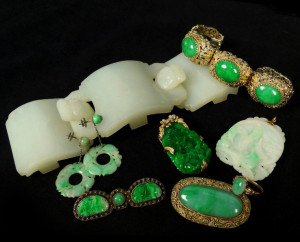 Jade is a beautiful gemstone often used for jewelry and sculpture, but is there more to jade than meets the eye? For centuries, cultures around the world have associated jade with spiritual and healing powers. Because of its green color, jade is also a symbol of good luck and friendship. The English word jade is derived from a Spanish term meaning “loin stone” because it was used by traditional healers to treat kidney stones and bladder ailments. However, when most people think of jade they often think of China, where jade is prized for its beauty, its healing powers, and its spiritual qualities.

Jade has long been associated in Chinese culture with the soul, immortality, beauty, and dignity. The Chinese word for jade is pronounced yu and is closely related to the word for “moral”. Throughout history, people have worn jade jewelry and decorated rooms using jade carvings. Jade carvings were often embellished with figural animals and botanical motifs. As with most jewelry, the more detailed the design the higher the price and the more elite the customer. Functional uses for jade include belt hooks, buttons and weapons. Even more utilitarian items like the handles to teapots, vases, or jewelry boxes have been carved from jade. 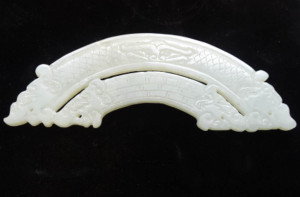 However, jade exceeds the typical use of adorning oneself with precious stones as simple decoration; it was a part of worship, of medicine, and burial. The use of jade in worship stems back to the Chinese Six Ritual Jades. Although the original meanings of these six worship rituals is unclear, today they symbolize the heavens, the earth, the north, the west, the east and the south. While still popular in the market today, these jade objects are now primarily collected as beautiful and important objects rather than for religious use.

Originally reserved only for the royal family and nobility, Chinese jade was a rare and prized possession throughout much of history. Its historic use in burial practices is incredibly interesting: during the Han Dynasty (206 BC–220 AD), a small carved ornament in the shape of a cicada might be placed in the mouth of the dead in order to secure the soul’s immortality. The royal 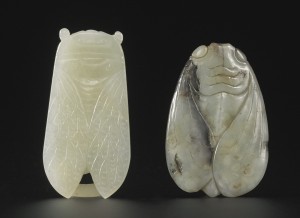 family and the wealthy aristocracy of the Han Dynasty took the mystical properties of jade a step further: entire burial suits were pieced together using silk or wire to completely encase the body in a protective layer of jade. Jade was believed to prevent the body from decaying, ward off evil spirits, and ensure the soul’s survival. Jade burial suits were vastly expensive and required years of skilled craftsmanship to create. The practice was forbidden after the collapse of the Han dynasty and gradually faded away. For years, historians believed jade burial suits to be a legend, or an embellishment of truth at best, but archeologists found the first jade burial suit in 1968. Several have been found since and can be found in museums. 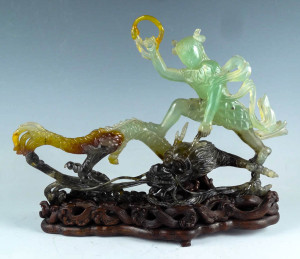 Did you know that not all jade is green? Scientifically speaking, jade is a rock formation made up of two different minerals, nephrite and jadeite. Jade can range in color from white, green, blue, lavender, yellow, orange, brown, and black, depending on the exact ratio of nephrite to jadeite. Most jade on the market is composed of more nephrite than jadeite. Jadeite is rare and highly sought after. Imperial green jade refers to the most intense emerald green stone, where there are few impurities. White jade, also called “mutton-fat” nephrite, is admired for its lack of impurities as well. Historically, these two colors are used in the most important, prized designs for their pure, intense qualities.

Any piece of Chinese jade, whether ornamental or utilitarian, is finding an enthusiastic market right now. The interest in jade’s beauty, historical status, and symbolism means it continues to hold its place as a desirable object in the cultural status cycle. Collectors are strong critics for color uniformity and clarity, and some argue that the value of jade is greater than gold or diamonds. Each piece of jade has a history, meaning, character and spirit. If you have a jade object or jewelry that you’re curious about, you can set up an appointment to bring items in to one of our offices. Give us a call at (518) 587-8787 or email us at marklawsonantiques@gmail.com.