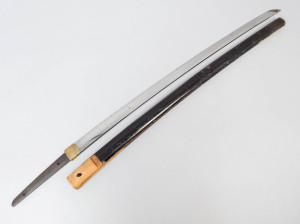 Inspired by swords imported from China and Korea, Japanese swords first appeared after 200 CE, the finest of which emerged in approximately 700 CE under the direction of Amakuni, a legendary swordsmith from the Yamato Province. In reaction to civil wars, skirmishes to attain and retain leadership, invasions from Korea and China, and Japanese invasions of Korea and China that necessitated exceptional weaponry, Amakuni and his fellow swordsmiths passionately dedicated their lives to designing the most effective, deadly blade. As a result, the long-used chokuto, or straight sword, gave way to tachi, or curved sword. Whereas the straight, single-edged chokuto could not be swiftly drawn from the sheath and was limited in the number of angles from which it could be thrust, the curved blade of the tachi could be drawn quickly and proved more efficient at attacking foes from multiple angles and while on horseback.

When battles on foot and individual conflict eventually replaced battles on horseback, however, a shorter, slightly less curved version of the tachi (the katana) was developed. Katana usually range from between two and four feet in length and are favored for their ease of use. Furthermore, the shortness of their blades allows them to be drawn more quickly and to pierce adversaries from the sharpest of angles. Katana were first crafted during the Muromachi period (1392–1573).

When purchasing an antique Japanese sword, authenticity is the foremost factor to be determined. An original will have visible grain in the steel of the blade, a true temper line made by differential tempering of the blade, a blade that is sharpened all the way to the base where it joins the hilt, and rusted tangs (projections on the blades), whereby deep black rust is indicative of the oldest swords. In other words, while rust is a detrimental feature on other types of antiques, the right kind of rust is highly-esteemed on the tang of antique Japanese swords and thus should not be tampered with.

We’re always interested in seeing antique Japanese swords and their accessories like tsuba or menuki. Please feel free to contact us if you would like us to take a look at one for you.