The High Rock Spring Flows Back to Life 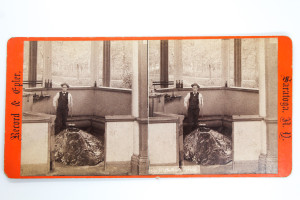 The High Rock Spring is one of the oldest and most enduring symbols of Saratoga Springs. According to local lore, healing properties of the mineral-rich waters drew the Native Americans of the region to take advantage of its strengthening properties. Some time during the 1700s, white men added their own part to the spring’s legend. The first documented white man to take the waters was Sir William Johnson in 1771. Wounded in the Battle of Lake George, Johnson was carried to spring by members of the Mohawk tribe. He drank the waters over the course of several days and experienced a remarkably quick recovery. Legend says he walked all the way home to Johnstown, though it’s more likely that he perhaps walked only part of the way (a distance of 30 miles). Regardless of how far Johnson walked, he quickly spread the word that the waters in the Saratoga area held unparalleled healing powers.

In 1773, the first structure was built near the High Rock Spring (now the location of the Olde Bryan Inn). Many notable men passed through the area, including future President of the United States George Washington in 1783. Washington (then Commander-in-Chief of the Continental Army) was so impressed by High Rock Spring that he later attempted to purchase the land; unfortunately, the land was already owned by Henry Livingston and Henry Walton, two early Saratoga-area landowners.

The spring itself is rich in iron and relatively low in carbon dioxide. As it bubbled up from the earth over thousands of years, it created a mineral deposit “hump”. Pictured at the above left is a stereoview showing the High Rock Spring in its heyday of the late 19th century. During the Victorian era, taking the waters at Saratoga Springs was medically approved. The unique mineral content of each spring was recommended for different types of physical and nervous complaints. Not only could visitors improve their health by taking the waters, Saratoga Springs was also already known for its entertainments: the glittering social scene included dancing and parties, as well as horseracing and gambling. 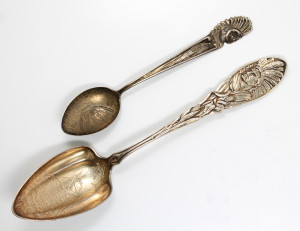 High Rock Spring became one of the most recognizable symbols of Saratoga Springs. It is depicted on the city seal, and also shows up on antique souvenirs like the late 19th century sterling silver souvenir spoons pictured at right. The sheer popularity of the springs ultimately led to their decline. The Saratoga waters were bottled and sold as patent cures. Natural gas companies also began bottling the carbon dioxide that emanated from the earth. Eventually this process damaged the water table to such an extent that by 1911, the High Rock Spring stopped flowing entirely. Of the 200 springs originally found in the area, only 17 have survived to today.

However, the High Rock Spring has been brought back to life for the city’s centennial celebrations. Over the last year, the Centennial Committee has been working to bring the city’s most notable spring back to life. The spring has been newly drilled to reach the water’s source, and plans are in the making for renovating the spring’s pavilion. The city plans to celebrate the revitalization of High Rock Spring on Saturday, September 12th, 2015 with a ceremony in honor of this unique symbol of Saratoga Springs.