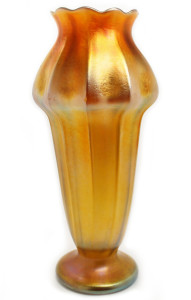 On this day in 1848, Louis Comfort Tiffany was born in New York City to Charles Lewis Tiffany, the founder of the renowned Tiffany & Co. Louis Comfort Tiffany forged his own artistic path, separate from the diamond jewelry legacy of his father, and became one of the most notable America designers in the Art Nouveau and Aesthetic movements. Tiffany began his artistic career as a painter but by 1875 he had become interested in glassmaking, working at several glasshouses in Brooklyn until 1877. He founded Louis Comfort Tiffany and Associated American Artists in 1879 with three notable American designers: Candace Wheeler (the “mother of interior design” and first American woman interior and textile designer), Samuel Colman and Lockwood de Forest.

During the height of Louis Comfort Tiffany and Associated American Artists, the company oversaw such important interior design projects as the Mark Twain House in Hartford, Connecticut. Most notably, the firm was commissioned by President Chester Arthur in 1881 to completely redecorate the state rooms of the White House. Tiffany worked on the East Room, the Blue Room, the Red Room, the State Dining Room and the Entrance Hall. He refurnished the rooms, repainting the walls with decorative patterns and adding wallpaper with densely ornate Aesthetic designs, and adding Tiffany glass to the light fixtures, as well as an opalescent floor-to-ceiling glass screen in the Entrance Hall. The Tiffany renovations were lost in 1902 when President Theodore Roosevelt restored the White House interiors to their original Federal style. (Some surviving period photographs showing the Tiffany renovations can be seen at the White House Museum). 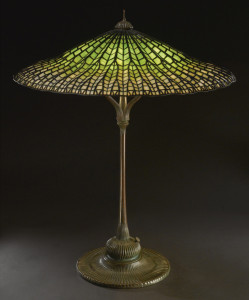 By 1885, Tiffany had turned his attention almost exclusively to glassmaking and dissolved Louis Comfort Tiffany and Associated American Artists. He founded his first glass factory in 1892, naming it Tiffany Studios, and proceeded to embark on a highly celebrated and innovative career in fine glassmaking. His constant drive to develop new techniques while exploring and expanding upon traditional methods led to some of the period’s most notable works of decorative art.

Louis Comfort Tiffany admired the lustrous iridescence of ancient Roman glass; these optical effects were caused by mineral impurities not found in finer glass. Other glassmakers were reluctant to include these mineral impurities so Tiffany began making his own glass, deliberately introducing these impure materials for their luminous effect. Tiffany transformed the process of creating stained glass by using opalescent art glass in a variety of colors and textures, cut to the desired size, and edged in copper foil; each copper foil edged piece was then soldered together to create windows and lamps with an unprecedented level of detail. The copper foil technique was revolutionary. 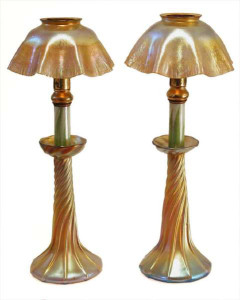 Tiffany was constantly innovating and creating. He patented the distinctive Favrile art glass technique in 1894. Unlike the majority of iridescent glass pieces of  the day, the vivid hues of Favrile glass were created by embedding the colors in the molten glass rather than applying them later to the item’s surface. Using metallic oxides and acid fumes, Tiffany could create a distinctive lustre effect. The term Favrile is thought to have been named after the word ‘fabrile’, old French or old English for ‘handmade’, indicating that the range was made by skilled craftsmen.

Although he was rightly renowned for his Favrile art glass creations, stained glass, and exquisite jewelry, Louis Comfort Tiffany also ran a foundry in New York that produced some of the finest bronze sculptures of the late 19th and early 20th century. A descendent of one of Tiffany’s foundry workers brought in some interesting historical memorabilia to one of our appraisal day events, which gave us a fascinating insight to the artistry and industry that went on behind the scenes.

Today we can celebrate the birthday of a prestigious artist and designer who gave the world an extraordinary variety of beautiful and innovative works of art. 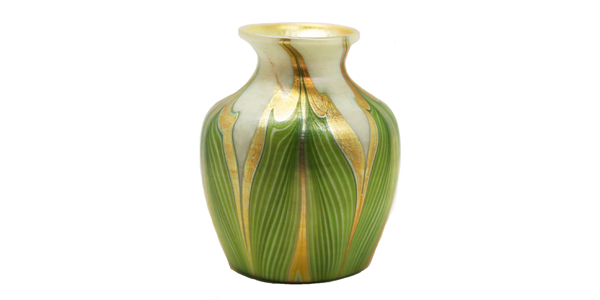