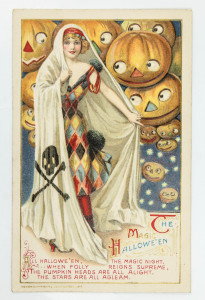 We’re taking a look at Victorian Halloween postcards today! In the late 19th century, Halloween was an increasingly popular holiday for young adults and children. Halloween’s origins date back thousands of years to the Celtic festival of Samhain (“Sow-in”). The Celts believed that on the night of October 31st, the veil between this world and the next would thin, allowing ghosts (and possibly devils) to wander the land. The following day, November 1st, marked the end of the harvest season and the beginning of the dark winter months. Through the ages, Halloween celebrations were marked with ghost stories, mischief-making, and superstition.

During the Victorian era, American culture shifted toward a more playful vision of the traditional Halloween. Costumes and masks were no longer worn to confuse the walking ghosts, but to celebrate the festivities. And while ghost stories were still told, they began to take on a more romantic emphasis. These Victorian Halloween postcards depict one of the most popular party games of the day: romantic fortune telling. 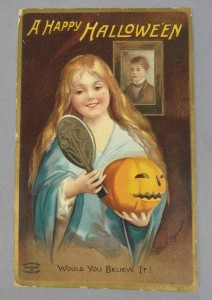 One of the prevailing beliefs was that a young woman could scry for her future husband using a mirror. Variations included cutting an apple into nine parts; the first eight parts would be eaten while standing in front of a mirror. The ninth apple part would be held over the shoulder “for the spirits”, and in gratitude the spirits would show the face of her future husband. There were many variations of using mirrors to divine the future in the Victorian era; mirrors were commonly believed to be portals to the afterlife. Using a series of mirrors to connect to the spirit world to find a glimpse of your soulmate was considered an exciting yet ultimately harmless undertaking. Gazing into a mirror to see your future or to talk to spirits continues as a Halloween tradition today with the children’s game “Bloody Mary”. 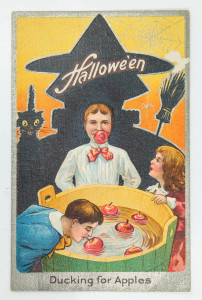 Another apple-centric fortune telling game required a young lady to pare an apple in one long curl. Not only would this bring her good luck, but it would also reveal the first letter of her future husband’s name if she threw the apple peel either over her shoulder or into a bucket of water. 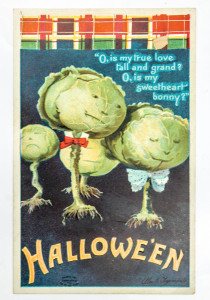 One of my personal favorites among the tradition of romantic fortune telling games: prophetic cabbages. This Irish tradition was very simple. On All Hallow’s Eve a hopeful young woman would don a blindfold and run into a field or garden. While still blindfolded she must pluck the first cabbage she encounters out of the ground, roots and all. The ease or difficulty in picking the cabbage would foretell how much effort she would need to put in to win her sweetheart. If the cabbage had straight roots, her future husband would be handsome; crooked roots indicated an ugly husband. If dirt clung to the roots, her sweetheart would be wealthy, while clean roots foretold poverty. The next step was to eat the cabbage. The taste would indicate the temperament of her future husband: sharp, bitter, sweet, tasteless.

Victorian Halloween postcards and early 20th century postcards encompass a staggering variety of designs, many of them charming and unexpected to the modern eye. Here are a few more to leave you in the proper Halloween spirit: 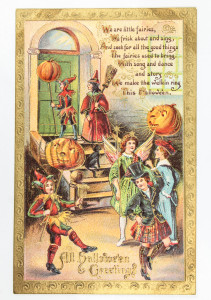 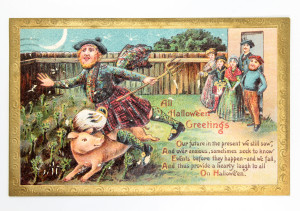 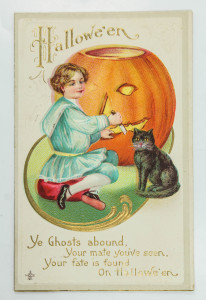