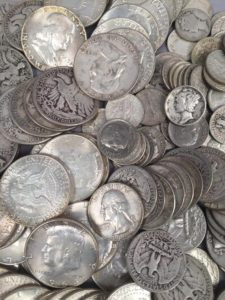 When helping clients settle an estate or prepare for an estate sale, the most common type of collectible coins we see are American silver dollars, half dollars, quarters. and dimes. The United States has been minting and issuing its own official coinage in gold, silver, copper, and nickel (along with various mixtures of nickel and copper) since 1793. From the 18th century until 1964, US silver coins were comprised of 90% pure silver alloyed with 10% other metals in order to make the coins more durable and less prone to wear. Silver and gold coins intended for circulation as currency are typically made this way because these metals in their pure state are very soft and wear very quickly – this is also why pure gold or silver jewelry is rarely made.

There’s a wide range in value for US pre-1965 coins, but we can help you figure out what it is you have. In the United States, the dimes, quarters, and half dollars coins minted in 1964 and earlier are 90% silver. These coins include:

These kinds of coins are sometimes called “junk silver” by coin collectors and dealers. They are typically common coins, minted in large quantities and easily found even today. However, there are some exceptions to these otherwise common coins. Most Morgan and Peace dollars, unless terribly worn or damaged, always have at least a small collectible or numismatic value above their silver value. There are also truly rare and collectible coins in these categories such as the 1916-D Mercury dime, the 1938-D Walking Liberty half dollar, and coins in high grades of uncirculated condition (as if they just came from the mint) which are very rare and prized by collectors.

The best word of advice is to always double check your coins before making a decision about what to do with them. A while ago, we had a client who brought in a World War II ammo case full of silver dimes from their parent’s basement, one of two boxes the parents had filled with dimes throughout their lives. Our client’s box ended up revealing $5,000-10,000 worth of 90% silver dimes, as calculated at the silver price of the day. The sister who inherited the other ammo case took it to a change machine and received $600-700 for the coins’ face value. Sadly, she had no recourse, and the true value of those silver coins was lost to the change machine.

Are you looking to identify a coin? Here’s a quick reference for the US 90% silver coins we see most often.

Do you have questions about buying and selling gold, platinum, or silver bullion coins? Call us at (518) 587-8787 or email us at marklawsonantiques@gmail.com.