The holiday season is upon us! As our thoughts turn towards warm gatherings of friends and families around the table, let’s take a look at Saratoga Springs’ most famous family recipe: the Saratoga chip. The history of Saratoga chips is controversial, passed down word-of-mouth through local legend and lore, embellished by some sources, disputed hotly by others. Although many of the specifics about the Saratoga chip’s invention can’t be verified, it can certainly be said that the thin crispy slices of fried potato were made famous in Saratoga Springs in the mid 1800s.

During the early and mid 19th century, potatoes were often served in what was popularly known as the French style: cut into thick slices and fried. These pommes de terre frites à cru, or “potatoes deep-fried while raw”, were served by President Thomas Jefferson in the White House. By 1813, many popular American cookbooks had recipes for fried potatoes. By 1859, the The Economical Cookery Book for Housewives, Cooks, and Maids-of-all-work by Eliza Warren used the term “French fried potatoes” for the first time in published history. 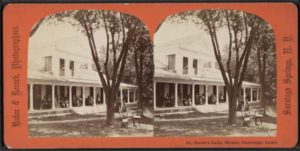 Legend has it that the Saratoga chip was invented around 1853 by George Crum, an African-American cook at Moon’s Lake House, a restaurant on the shore of Saratoga Lake. One day, a wealthy patron came in and ordered the house specialty: Moon’s fried potatoes. But, when he received his order, he sent them straight back to the kitchen, claiming they were too thick and soggy to eat. Crum sliced a thinner batch of potatoes, fried them, and sent them out to the customer only to have them sent back again, this time accompanied by the imperious one-word demand, “Thinner!” The story goes that George Crum did not appreciate criticism of his cooking abilities and decided to teach this demanding customer a lesson. Crum sliced the potatoes paper thin, salted them heavily, and fried the heck out of them until they were crispy and brittle, too brittle to be eaten with a fork without shattering (and since no polite gentleman would have eaten with his fingers in public, this was the cherry on Crum’s spite sundae).

Much to Crum’s surprise, the picky customer loved the brittle, salty, deep-fried potatoes. According to lore, the customer even requested a second batch! (However, the stories do not relate whether the gentleman ate them with his fingers after all.)

And so the Saratoga chip became the new house specialty at Moon’s Lake House. In 1860, no doubt inspired by the success of his invention, George Crum opened his own restaurant in Saratoga Springs, located on Malta Ave near Saratoga Lake. His restaurant was widely patronized by the wealthy elite of the day like the Vanderbilts, Jay Gould, and Henry Hilton. It is claimed that Crum placed boxes or baskets of Saratoga chips onto each table, marketing them as “take-out” boxes. The Saratoga chip rapidly gained in popularity and spread across the nation. Eventually they were re-named by the generic term “potato chip” as new businesses emerged, building factories to mass produce the now beloved snack. 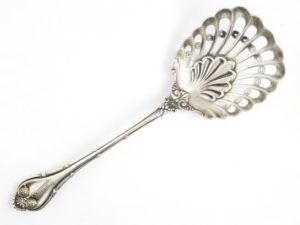 The widespread popularity of the Saratoga chip in the mid and late 19th century was reflected in the silverware of the day. The wealthy elite of the Gilded Age embraced conspicuous displays of excess, and loved to set a lavish dinner table with sterling silver flatware covering every inch. Silversmiths of the day obliged by creating unique serving pieces for each type of food: asparagus tongs, game shears, grape shears, nut picks, butter picks, butter knives, berry spoons, clear soup (bouillon) spoons, cream soup spoons, breakfast coffee spoons, dinner coffee spoons, and many more. The Saratoga chip was so popular that it earned its own dedicated serving piece: the Saratoga chip server. The serving piece features a wide flattened bowl with pierced detailing to drain any excess grease. Pictured above right is a 19th century Saratoga chip server from Whiting, in sterling silver, in the Empire pattern.

The American Pure Food Cookbook and Household Economist, published in 1899, provided the American public with a recipe for making Saratoga chips, as well as suggesting several different menus for breakfast, lunch, or dinner that incorporated the chip as a side or appetizer. One suggestion for breakfast pairs the Saratoga chips with fried chicken, sliced pineapple, steamed oatmeal, mushroom omelet, and coffee. The cookbook’s menu suggestions were tailored “[to] be within the reach of the average household at all times. These menus have also been prepared with another idea in view; namely, that of affording the variety which the latest scientific investigations in dietetics have shown to be necessary for the best nourishment of the human body.”

It’s always a pleasant surprise when a client brings in a group of sterling silver flatware for evaluation and we discover a Saratoga chip server. Saratoga’s rich history and unique past makes for some very interesting finds and historical memorabilia. As we sit down for Thanksgiving dinner and contemplate the upcoming holidays, we can be thankful for the multifaceted history that surrounds us here in Saratoga Springs and the entire Capital Region.