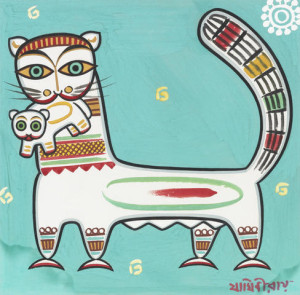 Today’s spotlight is on a beautiful pair of Jamini Roy paintings that we sold for a client. We’re updating the highlights from our 2014 consignments and auctions, and these paintings were certainly an exciting find. Jamini Roy (1887-1972) was a celebrated Indian artist who was noted for his revolutionary modernist work. Roy began his artistic career painting in an academic style, creating Western style portraits and impressionistic landscapes. He became dissatisfied with working only in the Western tradition and turned instead to the art of his own culture.

Roy spent his boyhood in Bengal and the traditional folk arts of the area, specifically Kalighat painting, influenced and informed some of his best known paintings. The Kalighat style emphasizes bold, flat colors and simplified forms. Roy reinterpreted the traditional iconography of Kalighat painting, creating vibrantly hued images of ordinary people and animals, and imbuing them with a lyrical grace and immediacy. 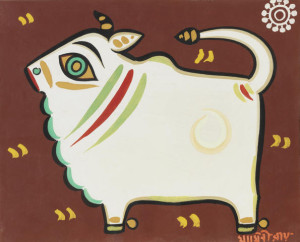 The clean, crisp modernist lines of Roy’s paintings captured the essence of his subjects. Roy’s paintings were a critical and commercial success. Critical acclaim revolved not only around how Jamini Roy combined sophisticated modernist sensibilities with the vibrancy of folk art, but also regarded his work as the revival of an Indian artistic identity, entirely separate from Western art. The Indian government honored him with the Padma Bhushan, the third highest civilian award, and he is a designated National Treasure of India.

These two paintings were purchased directly from Jamini Roy in the 1960s. We brought the paintings to sale for our client where they sold for a combined price of $11,932.