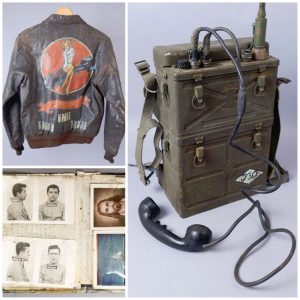 For this sale we have been consigned a one owner collection of World War II era original United States armed forces equipment and memorabilia including Helmets, Uniforms, Field Equipment, Edged Weapons, Sweetheart Jewelry, etcetera, of an Upstate New York collector, as well as a nice group of 19th century American military percussion muskets and edged weapons.

We are offering a remarkable archive of artwork, photographs, poems and memorabilia of Perry Smith, one of the two notorious murderers of the Herbert Clutter family of Holcomb, Kansas. The story was told in the best selling 1966 book “In Cold Blood” by Truman Capote which was made into a blockbuster film of the same name. The items offered primarily comprise the personal scrapbook of Perry Smith which was gifted to prison Chaplain James Post immediately prior to Perry Smith’s execution by hanging on April 14, 1965. The group includes Smith’s personal copy of “On Man & Nature” by Henry David Thoreau, which is inscribed to Reverend Post and extensively annotated. There are also original mug shot photographs of Smith and Richard Holcomb from arrest and incarceration at the Kansas State Penitentiary.