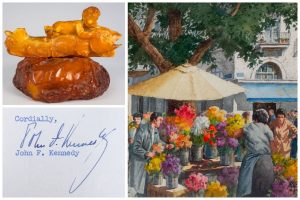 Our Fall Auction has another interesting and desirable group of local estate consignments, much from a single owner estate with a focus on good continental decorative objects. A good group of JFK related Autograph Letters and related material comes from the estate of Sebastian Ruggerio, longtime Kennedy associate and Democratic Party fundraiser and Lobbyist. Another group of 19th Century US Presidential letters and documents comes from the descendants of William Hunter, Jr., appointed to the State Department in 1829, serving as an assistant and acting Secretary of State until his death in 1886.

A large group of good Continental decorative and fine art comes from the collections of a single family, one of whom was D.G. Carpentier, known for producing exceptional and sought after 20th century renditions of early English pottery including fine Mocha Ware which we are offering a good selection of.

An interesting and diverse sale overall with interesting historic and collection worthy rare and desirable objects.