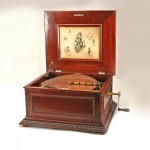 April 20th – May 4, 2005:
The Paperweight Collection of Sarah Josephine Davis