Christmas, like everything else in 2020, was very different. One thing that will stay the same is that one Mariah Carey Christmas song that gets played on all of the radio stations. You know it. No? Well, let me sing you the refrain, “All I want for Christmas is a windup horse drawn chariot painted with scenes from the rule of Roger I of Sicily.” Wait. That can’t be right. I think I must have mixed some things up. Anyways, what do kids want for Christmas nowadays? I am sure most kids would say the new PS 5 or the iPhone 12 or some other techy gadget that will become obsolete in 5 years. Why not get them a toy that has been around for decades, and doesn’t require *whispers* charging. I know you may think I am crazy for suggesting such a thing for today’s technology immersed children, but  it may not be such a bad idea to get them away from a screen when they already spend 8 hours going to school on one.

Here is one toy from yesteryear that has thus far stood up to the test of time with no batteries required. 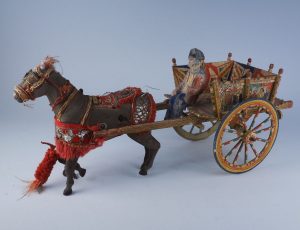 This horse drawn carriage seems like a simple, wind-up carriage with some colorful decorations. However, when you look closer, you realize the paintings on the carriage are very intricate and tell a pretty interesting story (well, an interesting story for someone getting a master’s degree in medieval history). At first it just looks like some knights doing whatever knights do. But once you read what panels, things start to get more complicated and exciting. (Once again, exciting for a medieval history nerd.)

When reading the panels on the left, they read, “BANDIERE BENEDETTE” and “RUGIERO E IPRIGIONIERI.” Now, with my basic understanding of romance languages (and a little help from Google translate), they say, “blessing of banners and Roger and the Prisoners”. The other side says, “RUGIERO IN PALERMO” and “RUGIERO INCORONATO.” According to my limited translation skills, the right side reads, “Roger in Palermo and Roger coronated”. Now who is Roger you may ask? Thanks to painting of the symbol of Sicily, trinacria, painted on the back of the wagon, Google, and Andrew Russo, a history PhD candidate at the University of Rochester,  I was able to figure the Roger on the cart is Roger I of Sicily who became the first Count of Sicily in 1072. In miniature, this cart portrays the a portion of the life Roger “Bosso” the Great.

The first panel on the left side marked “BANDIERE BENEDETTE” or the “blessing of the flags.” This panel depicts 3 knights standing in front of a bishop and three banners known as “Vexillum Francorum” aka the flag of the French crusaders. Next question, why would a Sicilian nobleman like Roger I be standing in front a French flag? Roger was not Sicilian. He was French. Well, Norman actually, since the unified country of France we know it today did not exist until the 13th century, and the Normandy Roger knew was more-or-less an independent entity ruled by a duke, but I digress. Anyways, Roger descended from the Hauteville line, a minor Norman noble family. As the youngest son of Tancred of Hauteville, he knew he would need to make his fortune somewhere else because he would never gain the family inheritance, so he looked to Sicily for his fortune.

In 1061, Roger went to Sicily after conquering Calabria with his brother Robert. At the time, a large part of Sicily was under Muslim rule, so under the flag of crusading, Roger and Robert fought the varying Arab princes for control of the island, and to bring it back into the hands of the Roman Catholic Church. In the summer of 1063, the brothers defeated the first Muslin army at the Battle of Cerami. This first panel depicts a Catholic bishop blessing Roger, his fellow crusaders, and their flags for victory over their religious foes. The second panel “RUGIERO E IPRIGIONIERI” or “Roger and his prisoners” depicts Roger and prisoners from his various battles for the island. 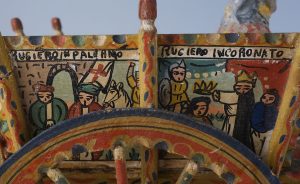 In 1072, the Hauteville brothers took the capital of Sicily, Palermo, as depicted in the first panel on right of the wagon. Under the words “RUGIERO IN PALERMO” or “Roger in Palermo” a victorious Roger rides into the city, after nearly a decade of since his first battle for the island.

In the final panel, “RUGIERO INCORONATO” or “Roger Coronated,” Roger is depicted as being crowned. Now, this is where things get a bit tricky. After capturing Palermo, Robert Guiscard (the Duke of Apulia, Calabria, and Sicily), made Roger, Count of Sicily. Counts are not crowned like a king, so this may be the artist taking a bit of artistic license. Around the time this wagon was being made in the 19th century, Italy was going through a period of social and political movements towards unification as a single entity, the Kingdom of Italy. A sense of national pride arose around the country surrounding the unification, so whomever made this wagon may have wanted to commemorate the first unification of Sicily under Roger I “the Great”.

Whatever the reason, the wagon paints a fascinating picture of Roger Basso and his part in the creation of a unified Sicily. This was originally going to be a post about several different kinds of old toys, but the more I started looking into the history behind this wagon, I became engrossed. I hope this little toy draws you in like it did me. Toys of the past can provide much more than just a moment of entertainment. They tell stories. Modern toys are all about keeping up with the technology of the day, become obsolete in a year, and get thrown out. Old toys may seem simple to modern audiences, but they provided generations of children with a means of entertainment and enjoyment that we will never fully understand. So instead of getting a child the new techy gadget that requires AA batteries, try an antique toy that will open their mind to the bygone era of when windups and marbles entertained for years, instead of days.

If you have any old toys that yo are interested in finding out about, please contact us, we are happy to help. To schedule an appointment for a free purchase evaluation, call us today at (518) 587-8787 or contact us at marklawsonantiques@gmail.com. We have offices in Saratoga Springs and Colonie, conveniently located for our clients in the Albany, NY and surrounding Capital Region.

History of the Unification of the Italian States – Office of the Historian, US Department of State